My Family Tree is an Apple Tree 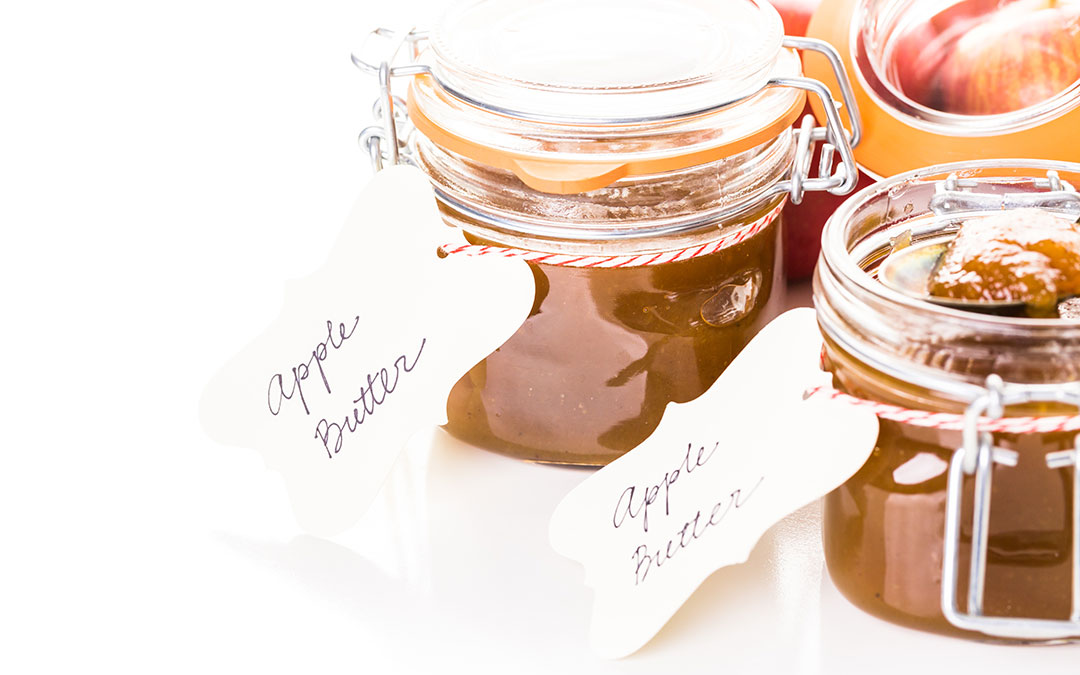 I wish I knew more about my ancestry — I couldn’t tell you when the first generation of my family came to America. I have general knowledge of the history of my name and I have it on good authority (my Grandma Minder) that on my mom’s side, I’m related to Mark Twain. (If that is not true, I don’t want to know.) For what I lack in information, I make up in passion. I have vivid cherished memories associated with several of my aunts, cousins, & grandparents — some still living, some deceased.

My great grandparents, the parents of my paternal grandmother, Iris Chew, were named Herbert Shutz and Alberta (Alford) Shutz. My daughter, Morgan, might be glad she wasn’t given one of these family names, but I think they are beautiful and strong.

I loved going to my great grandpa and grandma Shutz’s house in Milton, Indiana when I was a child. It was a typical grandparent home. I distinctly remember the beautiful aluminum storm door ornamented with delicate curlicues that proudly graced the front of their house. Inside, their furniture was old, but having been impeccably cared for, was still like new. I remember a lot of lace — doilies, curtains, and tablecloths. The few toys they had were what they kept while raising their own children. Ironically, the agednesss of the toys made them novel my brother and me. 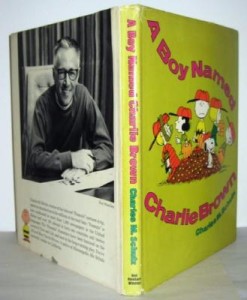 I remember reading a first edition, “A Boy Named Charlie Brown,” by Charles Shultz and in haste, seeing it as Charlies Shutz and assuming this book must have been written by a relative. I loved that book and looked forward to turning those pages every time we visited.

They also had a first-edition copy of, “Harold and The Purple Crayon,” published in 1955, a book that sparked my imagination. What I wouldn’t give to have those books now, but I have no idea where they ended up. I would like to fantasize that one of my relatives would read this post and think, “Hey, I have Grandma and Grandpa Shutz’s books in a box in the basement. Stacy should have those!” (If that is you, CONTACT ME! I will gladly accept!)

I’m not holding my breath though. Grandma and Grandpa Shutz valued their faith and people much more than possessions. These precious pearls were probably sold at a “rummage sale” or discarded as childish trinkets. I may not have the books, but I’ll always treasure the memories.

We ate several meals at Great Grandpa and Grandpa Shutz’s house when I was quite young. I remember while eating one such meal in their beautifully-decorated dining room, Great Grandma asked, “Do you kids like rabbit?”

“No, grandma,” my brother and answered in unison.

“That’s funny,” she replied, “you seem to be enjoying it!”

Eventually, grandma was moved to a nursing home and my family visited her often (though not as often as we should have) and grandpa continued visiting her even after she had no idea who any of us were. They both gone on to their eternal home in glory and I look forward to some day, visiting their home in heaven. Maybe we’ll enjoy some rabbit stew.

But I know we will enjoy some of Great Grandpa’s apple butter. After all, it is heaven, isn’t it?

One of the best memories I have of my great grandparents is the amazing apple butter that great grandpa made from scratch and preserved in jars which were gifted to those fortuitous enough to receive some. This wasn’t just apple butter, it was the best apple butter anyone ever tasted. Much as little children dream of being part of a championship wining sports team, I imagine Winesap Apples (as were called for in his recipe) dreamed that some day, they might be slow cooked in a bath of cider and spices as a batch of Great Grandpa’s apple butter — the highest calling an apple could achieve.

I am not sure who opened that last jar of Great Grandpa’s. I don’t know if they knew the profound significance of enjoying the last of the divine goodness. I don’t know if it was spread on an English muffin, a piece of rye toast, a flaky biscuit, or enjoyed straight from the jar with a spoon, but like the dinosaurs and Windows 95, Great Grandpa’s apple butter is now gone forever.

A few years ago at a Shutz family reunion, the subject of Great Grandpa’s apple butter came up. Somehow, it was revealed that my Aunt Kathy had a copy of the original recipe. I was shocked that a copy of the formula existed in a drawer in a rural home when it so obviously belonged in a climate controlled, hermetically sealed environment protected by armed guard.

Apparently, it isn’t as well-kept a secret as I had imagined because Aunt Kathy willingly shared it with my cousin, Clay, who passed it on to me. Yesterday, I made my first batch of Great Grandpa Shutz’s apple butter and sealed 5 pint-sized jars of awesome sauce. My plan is to carry on the traditions Grandpa started — not only making and sealing the apple butter, but also gifting the jars to people I love. It will be a Merry Christmas this year, indeed!

Of course, I had to do some quality control and make sure that my own version of Great Grandpa’s apple butter was worthy to be associated with his name. After all, I only had his recipe (lacking many specifics that were just second nature to him). My favorite part of the recipe reads, “Cook as though you were making applesauce.” Yeah, that would probably make perfect sense if I had ever made applesauce. Which I have not.

No, I didn’t have his knowledge, experience, or the vintage equipment he probably used too peal and core his apples.

But I had “the formula.”

So this weekend, we drove to Anderson Orchard in Mooresville, Indiana, the only orchard that was open on Sunday and offered Winesap apples. (It’s early in the Winesap season.)

One bite of the apple butter took me back almost 40 years. Is my apple butter as good as Great Grandpa Shutz’s? I doubt it, but nostalgia is a powerful flavor enhancer and the apple butter I made was absolutely delectable. Yesterday’s batch yielded 5 pints — would have been 6 but I put some in a plastic container to enjoy in the next few days.

My goal is to do 100 pints this year and gift a jar to everyone in the family who shares my fond memories of Great Grandma and Grandpa Shutz.

This is just as I received it. Below, I will share the approximate measurements I used for my 6-quart slow cooker.

Notes from whoever provided the recipe to my Aunt Kathy:

Notes from my cousin, Clay: 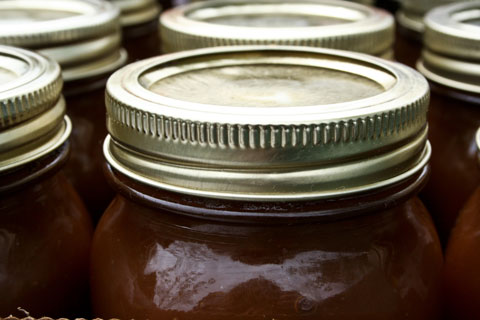