When I Knew I Was Fat 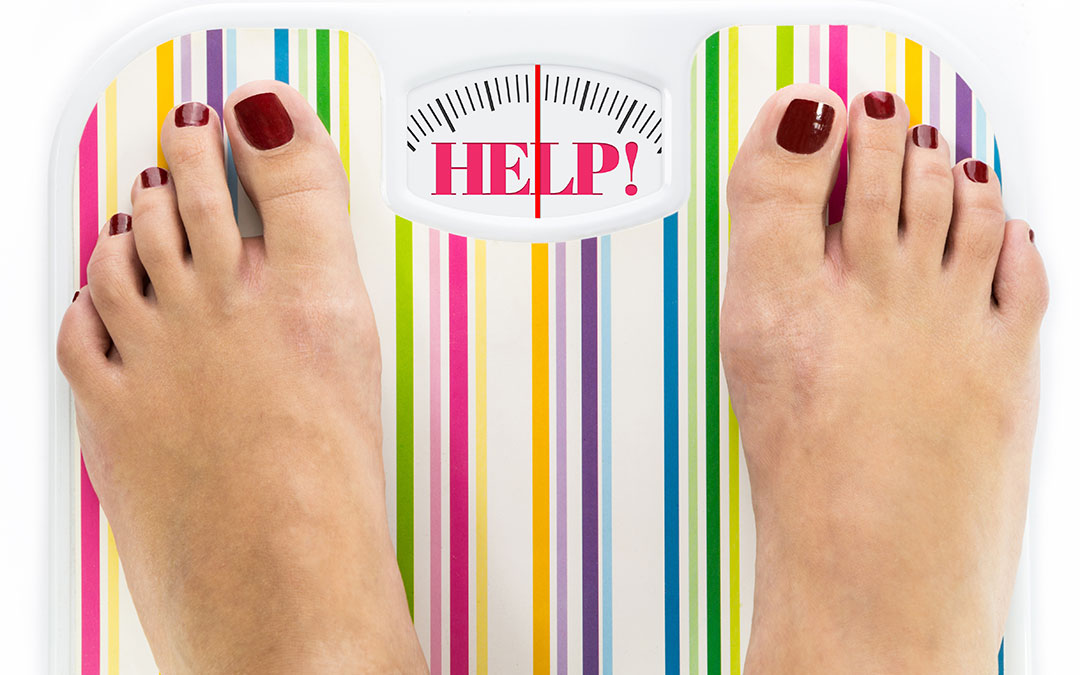 Growing up, I guess I was always a little chubby. My mother was a great cook and genetically, I was never programmed to be super thin. Walking to and from school, riding my bicycle around the neighborhood, and playing softball were enough to keep me from entering “obese” territory and even up to my wedding day, I maintained a reasonable weight. My wedding dress was a size 10 — that was July 27, 1996.

Our daughter was born in December of 1997, 5 weeks shy of full-term. We endured an eventful pregnancy. In October, at about 26 weeks, I went into pre-term labor, which, thank God, they were able to stop. However, from that time on, I was under pretty strict orders to limit my activity. I was put on disability and unable to work. I was advised to stay down as much as I could. In addition to restricted activity, I was also put on a regimen that included weekly steroid injections to accelerate the development of our baby’s vital organs in the event the pregnancy didn’t go to term.

I convinced myself that once the baby was born, I would be able to get back to my pre-pregnancy weight, but that didn’t happen. I remember wearing my maternity clothes for far too long after the birth of our daughter and I knew that was not right. Not only did I fail to lose the weight, I continued to gain weight steadily over the next few years.

Even as my weight ballooned out of control, I refused to admit to myself I had a real problem.

The Moments of Truth Through the Years

As I maneuvered the path of denial, there were several times where I at least had to consider that my weight may be more of a problem than I wanted to admit:

I worked retail when Morgan was a baby and our company would often utilize “secret shoppers,” to make sure we were offering exceptional customer service. The reports of the secret shoppers would be reviewed during our staff meetings and posted on the bulletin board in the break room. On one such report, the secret shopper reported that she had been helped by, “a very helpful, very nice, heavy-set lady named Stacy.” Instead of being relieved that I had passed the customer service test, I was appalled to be described as “heavy-set.” To me, that was just a nice way of saying, “FAT.” 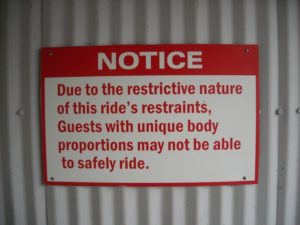 I love roller coasters. My husband, David, and I even went to an amusement park as part of our honeymoon. But among the many warnings posted at the entrance to any ride is one that reads, “Riders of unusual proportions may not be able to ride safely.” Again, “unique size,” or, “unusual proportions,” are just really nice ways of saying, “fat.”

As my body grew larger and larger, I feared that one day, I would attempt to climb into a roller coaster seat and not be able to engage the safety harness. I imagined the humiliation of several teenage park workers trying desperately to stuff me into a seat like an over-packed suitcase. I envisioned having to do the walk of shame as I exited the ride so people who do NOT have unique body proportions could get on with their ride.

As we would stand in line for a ride, I would scan the passengers in the returning cars, desperately looking for someone larger than I who had managed to wedge himself or herself into the seat. Only once I had identified someone larger who successfully fit in the ride could I begin to relax.

It was during that time that I realized my weight was costing me more than blows to my self-esteem and health, it was beginning to threaten my freedom to do the things I most love in this life. Roller coasters are just one example of the activities that my obesity might keep me from enjoying unless the situation was brought under control.

The Happiest Place on Earth

In 2000, our family took a trip to Disney World. I’m a terrible traveler to begin with. Packing, rushing, and staying in hotels send my OCD tendancies into overdrive. But one haunting thought kept me awake the night before we were to depart for the happiest place on earth. Would the seat belt fasten over my belly or would they have to get an extender? Just as at the amusement park, I imagined the flight attendant, trying in vain to help me fasten my belt before giving up. I could imagine the burning, judging stares I would endure as I waited for them to bring the XXXXXL extender to my seat.

You see, during this time of my life, I did everything I could to avoid attention. I convinced myself that every person who looked my way was shocked and mortified by the size of my body, wondering how anyone could let herself get to that condition. Even as my health was a ticking time bomb, it wasn’t a stroke, heart attack, or diabetes I most feared — it was public humiliation.

My husband and I didn’t really set out to have an only child. I guess I always imagined that we would have another, but when we decided it was time to let nature take its course, nature didn’t. We tried some relatively low-grade medical intervention to help stimulate ovulation, but were not successful in getting pregnant again. At the time, I was devastated. It had not been my plan for my daughter to grow up without a brother or sister. I felt robbed, because if I had known during my first pregnancy that it might be my only, I would have cherished every moment differently. I remember while pregnant thinking, “next time, I will know this or do that,” never believing there would be no, “next time.” I mourned the child I wouldn’t have and grew bitter every time I saw a news story about abusive or neglectful people who should never have been allowed to have children. Why should they have children while we struggle with infertility?

Looking back, I can now realize and accept what a blessing it is that my body didn’t endure another pregnancy. The high likelihood of gestational diabetes, additional weight gain, and other health risks my obesity would have introduced to the pregnancy would have been bad for me and for an innocent baby. When the conservative fertility treatments didn’t prove effective for us, I began to accept the possibility that we were not meant to have more than one child. I stopped letting the hope of another child rob from the daughter we did have and love. I began investing in and embracing the special bond parents have with an only child and recognizing and appreciating the traits that were unique to her as an only child.

Around that time, I was also diagnosed with insulin resistance, which is a pre-cursor to diabetes, and a condition called PCOS (Polycystic Ovary Syndrome). Receiving this diagnosis, instead of motivating me to change, actually gave me a sense of permission, as if my part in this diagnosis was somehow excused. But the word, “syndrome,” is defined as, ” a group of symptoms that together are characteristic of a specific disorder, disease, or the like.”

I didn’t have a disease, I had a syndrome, characterized by symptoms which included hormonal imbalance, infertility, ovarian cysts, obesity, insulin resistance, sleep apnea, and others. I convinced myself I was fat because I had this condition, but I strongly suspect now that I developed PCOS because I let my weight get out of control. Everything I experienced could be explained by my weight soaring out of control.

It’s a chicken and egg scenario — did PCOS make me fat or did my obesity cause PCOS? I believe it is the latter, though I didn’t want to admit it at the time. It becomes a self-fulfilling prophecy, though, because some of the symptoms of PCOS (hormonal imbalance and insulin resistance) do make it progressively more difficult to lose weight, but losing weight is best way to, “treat,” or, “reverse,” PCOS (in my opinion and experience.)

Why do I believe that? I believe it because when I started to lose the weight, the symptoms grew less and less severe. I quit snoring and started sleeping better, and my body again became appropriately sensitive to the effects of insulin. Though I have no plans to test this particular part of my theory, I am also confident that, had circumstances not changed, we could have had another baby without medical intervention.

Dear God, I accept this on faith and require no proof, thank you! Amen.

Each symptom of PCOS can be treated individually (fertility treatments, hormone supplementation, prescription medications like Metformin to treat blood sugar control issues, and a CPAP machine to help with sleep apnea). But I believe that by losing the weight, I addressed ALL of the symptoms by treating the root cause of the syndrome.

A Difficult Reality to Accept

There were other instances, I’m sure, where I was faced with the reality of my ever-escalating weight, but those are just some that stick out as definitive moments in my life. On my 30th birthday in 2005, I tipped the scale at 287 pounds. At 5’2″ tall, I had a BMI of 54, which qualified me not only as overweight, but morbidly obese. I was no longer chubby. I was no longer a little overweight. I wasn’t just carrying around some of the leftover baby weight. I wasn’t even, “just,” obese.

I was clinically, “morbidly obese.”

The word, “morbid,” evokes images and thoughts of death and in the condition I was in, death was far more likely that it should be for a 30-year-old woman. Even if I didn’t drop dead of a stroke in my 30’s, I was shaving years off the end of my life with my habits and behavior. I was going to make my husband a widower and leave my daughter without her mother earlier than either of them deserved. None of us is guaranteed even tomorrow, but if I continued down the path of reckless self-destruction, I was certainly bringing about an earlier death.

They say the first step is admitting you have a problem. I had to admit — I had a problem. There were some facts I could no longer ignore:

Something had to change.

I had to change. 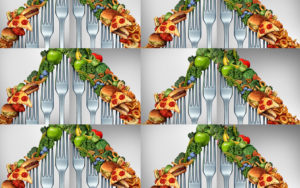