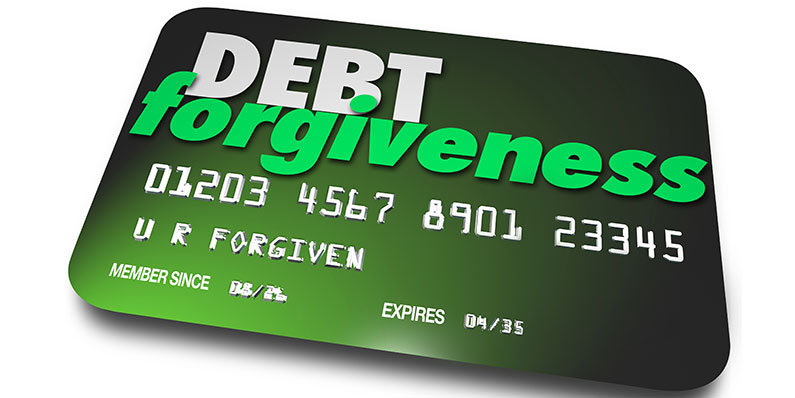 Parable of the Unforgiving Debtor

23 “Therefore, the Kingdom of Heaven can be compared to a king who decided to bring his accounts up to date with servants who had borrowed money from him. 24 In the process, one of his debtors was brought in who owed him millions of dollars. 25 He couldn’t pay, so his master ordered that he be sold—along with his wife, his children, and everything he owned—to pay the debt.

26 “But the man fell down before his master and begged him, ‘Please, be patient with me, and I will pay it all.’ 27 Then his master was filled with pity for him, and he released him and forgave his debt.

28 “But when the man left the king, he went to a fellow servant who owed him a few thousand dollars. He grabbed him by the throat and demanded instant payment.

29 “His fellow servant fell down before him and begged for a little more time. ‘Be patient with me, and I will pay it,’ he pleaded. 30 But his creditor wouldn’t wait. He had the man arrested and put in prison until the debt could be paid in full.

31 “When some of the other servants saw this, they were very upset. They went to the king and told him everything that had happened. 32 Then the king called in the man he had forgiven and said, ‘You evil servant! I forgave you that tremendous debt because you pleaded with me. 33 Shouldn’t you have mercy on your fellow servant, just as I had mercy on you?’ 34 Then the angry king sent the man to prison to be tortured until he had paid his entire debt.

35 “That’s what my heavenly Father will do to you if you refuse to forgive your brothers and sisters from your heart.”

Nobody Wants to be a Punching Bag

Yesterday was one of the hardest days I’ve had at work in a long time. I do everything in my power to make sure that each of our customers has a good experience. I’m sometimes even accused of caring a little too much and over-obsessing over the projects that don’t go as well. Guilty.

Here’s the thing — we can perform 9 out of 10 of our projects perfectly, but if you are the one who had a bad experience, we were 100% bad. For that reason, I strive for perfection. But I’m definitely not perfect.

For some things that were directly my fault and many that were not, one of our clients had a very unfortunate experience with us from start to finish. Mistakes were made, causing multiple delays. There were times that I should have communicated better, but I shied away, knowing how unhappy they were (and for good reasons). It is not an exaggeration to say that pretty much everything that could go wrong on this project did.

And yesterday, I felt the hammer come down right on me. I stood in front of a customer whose lip was trembling, eyes were glaring, and voice was shaking as he told me just how much he appreciated everything we put him through. There was nothing I could say, no longer anything I could offer, I could only take it. I stood before him and just let him go. He didn’t yell at me, curse at me, or complain about anything that wasn’t a fact, but I took all the wrath for not only my mistakes, but everyone else’s as well.

I said all I could say, which is, “I’m sorry, and for what it’s worth, this is not typical of the service we provide.”

When he was finished, I called my husband because I just needed to hear the voice of someone who would speak to me with kindness, knows I’m more competent than not, and loves me. I cried on the phone (I’m not a crier) as I recounted how the verbal scourging had cut me to the quick.

I probably take things more personally than most people, but I sincerely care, so I really can’t change that. Every time I thought of it for the rest of the day (which was only about 58 times per minute), I was immediately overcome by that sense of regret. In fact, I woke up at 3:25 a.m. this morning to use the restroom (as I have an undersized bladder to go with my over-sized guilt complex) and on the way there, I immediate thought, “now, don’t start thinking about Mr. _________ because you’ll never be able to go back to sleep.”

And that was all it took to put me into the cycle again. I lay awake until almost 5:00 a.m. replaying the whole ugly conversation and cursed project in my head.

The Moral of the Story

But here’s the lesson. His wrath was not misplaced, unfair, or unfounded. I deserved (as a representative of my company) every bit of it. I would have loved grace (of which he did grant me some — he could have yelled). “Oh, we understand, these things happen…” but I got justice. I got what I deserved, not a pass.

There are many times when I am on the other side of such a situation — times when I have the power to dole out justice or to bless someone with grace. I wish that I gave more grace than justice, but I know I don’t. I’m hot tempered and expect other people in customer service roles to be as zealous as I (usually) am.

The Souvenir Cup — Case in Point

At the end of that positively miserable day, my daughter Morgan and I had planned to surprise my husband David with tickets to Cirque du Soleil for his birthday. We hustled him into the car when I got home from work and headed downtown Indianapolis to the home of the Indiana Pacers, Bankers Life Fieldhouse, where the performance was being held.

The tickets were not inexpensive, but it was a great show. When we found our seats, I went with my daughter to the concession stand to get a drink before the show started. I ordered a large drink for David and me to share. It was $10.00! For Diet Mountain Dew! BUT, the clerk informed me, because I had purchased the souvenir cup (which felt like nothing more than heavy foam, probably not even dishwasher safe, which meant it has no place in my kitchen) we could get FREE REFILLS! Well, in that case, don’t skimp on the ice (my favorite snack).

At intermission, David went out to get a refill and was told, “We’re not doing free refills tonight.”

When he came back in and told me that, I got all fired up and jumped out of my seat, declaring, “Oh, YES, they are.”

I went out and found someone standing in the Lobby with a badge on and asked him, “Are you over concessions?”

He responded to me with concerned kindness, “I’m so sorry. Your husband was told wrong. We will absolutely refill that cup and if he paid for a refill, I will refund his money.”

And he did. We got our free refill. Well, actually it cost me my dignity.

I Kicked the Cat

When I sat back in my seat, at first I was proud of how I had stood up for our rights as consumers. Then, I was sorry for how I had spoken to that man. Yes, we were owed a free refill, but I could have asked him about more kindly instead of going off on him.

The truth is, I probably just let him have it because I was still feeling pretty beaten down from earlier. There’s a parable about having a bad day at the office and coming home and kicking the cat. That unsuspecting concessions manager was my cat and I kicked him like Colts kicker, Pat McAfee.

Granted, the parable of the Unforgiving Debtor would have been more accurately illustrated had our customer given me total grace, forgiving our carnival of errors with a wave of his hand, but I played my part in the story beautifully.

I didn’t give the same grace I would have liked to receive.

Oh, but I have received plenty of grace from God. Because of the sacrifice made to cover my sins, I have been given a pardon from death. Instead of receiving ultimate justice, I will enjoy ultimate grace.

I’ve had a much larger debt forgiven than a bad experience on a remodeling job and it is my edict to extend that same grace to others. I hope I can do better next time.